Having recently finished the last book in Liu Cixin's instant classic "The Remembrance of Earth's Past" series, Death's End, I can only report a feeling of total amazement and awe. There is so much about this novel that blew my mind, that offered different and better ways of viewing the universe. This novel did what I wish more novels would, serve up a new universe entire, evoking beauty and horror, nobility and disgust, in a timeless monument to unfettered speculation. 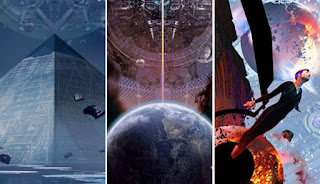 Obviously, in discussing the events of the last of a trilogy books, spoilers are to be expected. I am, however, going to try to avoid discussing much beyond the first 100 pages of the third novel.

I read the translation of this novel, as ushered into being by the amazing talent of Ken Liu. Ken has written of a certain prickliness when it comes to translating work. He makes an effort not to anglicize the source material, not smudging away the occasional difficulties in bringing Cixin's intention into English prose from its original Mandarin. That said, I really did not find myself experiencing much trouble reading this book. Significant groundwork has already been laid of course for this novel - the previous two novels (The middle novel, Dark Forest, was translated by Joel Martinsen) in the series did a lot of the hard work in establishing Cixin's vision of the universe. This novel is the payoff.

A quick recap: during the Chinese Cultural Revolution, a Chinese astrophysicist comes across a signal from an extraterrestrial intelligence and responds with a message of her own. The intelligence on the other side of this message, the Trisolarians, quickly reveal intentions far from noble, and send an initial response in the form of a swarm of sophons, particle sized computers meant to spy on Earth and stymie any further growth in scientific knowledge. Over the next few centuries Earth tries various measures to prepare for the expected invasion, including the deployment of the Wallfacers, a group of individual human beings attempting to pierce the Trisolarian's blanket of surveillance by developing plans for resistance in the only space free from interference - their own minds. Ultimately it is one of these Wallfacers, Luo Ji, who is able to devise the only workable defense against aliens with technology far in excess of mankind's - dark forest deterrence.

This is an idea which I have been grappling with in one form or another for the past year. I will do my best to explain it as Cixin does in the eponymous novel, the middle book of the series. Essentially, the Dark Forest is an attempt to solve the Fermi Paradox. Given the staggering number of projected planets in our galaxy alone how is it that Earth has no evidence of other intelligences? Cixin's answer is not unique in its basic outlines. Basically, any civilization of sufficient development would realize that the one thing you most want to avoid is discovery by another intelligence. All intelligence is a potential threat to another and without any commonality of culture, language, or basic physiology, that threat cannot be easily minimized. The only alternative is to wipe out the other before they have a chance to do you the same favor. The image Cixin employed is a vast, night-shrouded wilderness, where each civilization is a frightened man with a knife, hoping to escape notice while seeking out others to knife in the back.

The only way to escape this cycle of preemptive destruction is to bring down the retribution of the true powers of the universe, beings capable of destroying entire stars with casual ease. Once the Wallfacer Luo Ji deduces this essential reality, he uses the threat of mutually assured destruction to halt the Trisolarian invasion.

So that's where Death's End begins: a stalemate between the Trisolarians and Earth set up and maintained by Luo Ji (now referred to as the Sword-Holder). After several decades of maintaining deterrence, it's far from clear that the status quo can be maintained much longer. A new Sword-holder, Cheng Xin, is selected to take over for the original. There are fears that this new candidate is not up to the job, and will not be able to convincingly use the deterrence weapon if pushed.

I think that's about as far as I can get without going to much into spoiler territory. I will say that Cheng Xin's decisions are complicated by a gradually unfolding understanding of the universe around Earth. A question introduced early in this book concerns the effect life has had on Earth. A character asks, "Is the natural world really natural?" What really brings Cixin's genius into focus is how he constantly builds upon his speculations. Each simple idea compounds upon the other, each angle of metaphor bringing light, previewing or reinforcing another corner of the universe. Late in the book, Cixin even gives a try at describing the actual powers of the galaxy and succeeds in bringing a terrible new dimension to the horror he is describing.

And yet, when all is said, even though this is one of the bleakest depictions of the universe, and mankind's role within in it, not all is hopeless. Some part of his vision allows for mercy. The utility of this attribute is always within doubt and possibly never fully changes anything, but nevertheless, the simple act of charity and sympathy for others is never completely abandoned. I honestly feel that this is the part of the novel that brings the work from simply being one of the best space operas I've ever had the pleasure to read to something approaching a masterpiece in world literature. Like a series of invented and cleverly structured fairy-tales introduced about half way through the novel, there are interlocking dimensions to Cixin's metaphors - ways that things that seem abrupt and inconsequential initially paint a far more complete picture later.

Another delight to this novel is the way it effortlessly glides through the centuries, deftly painting pictures of each moment of human civilization's response to the Dark Forest. Like a symphony, there are themes and motifs that reappear and transform over time, but the basic tragic outline of Liu's vision always rings through. A novel like this, following a single character on a journey across eons of time, brings to mind such classics as Olaf Stapleton's "Star Maker," and Greg Bear's "Eon."

This is a novel about all the ages of man written for all the ages of man. A week after finishing it, I feel as though I am still within the world of this novel, of this series. It is a vision of the universe so compelling, I suspect it will take other authors years, possibly decades to fully work through the meaning and implications of this work. Highest possible recommendation.