Variations on a Theme: Review of 2312 by Kim Stanley Robinson

July 05, 2013
More difficult than portraying technologies of the future, or alien worlds, or even of believable alien species, is that of creating human societies and customs of the future. The uncanny valley is in full force once a writer sets as his or her task creating the beliefs, motivations, and prejudices of human beings. One of the biggest complaints I hear about science fiction in general, and far-future hard SF in particular, is that the characters are not fully developed, not convincing.

Perhaps the reason is that most writers, when looking at the future, fall into one of two traps. The first trap is of changing human life too little. The future, these writers suggest, will be exactly like today only with more/less technology. Examples of this are not hard to recall, think of Vonnegut's many social commentaries, or 1984, or even SF greats like Clarke and Asimov. People in the stories basically behave as though they were contemporaries of the author, not children of future societies.

The second trap is to exaggerate the impact of some technological, or social development. A new invention radically distorts the customs of the future, so that each character's life is warped in reaction. A lot of science fiction movies are like this, even good ones like Gattaca, where each 'weird' aspect of future life stems from the emergence of X.

Kim Stanley Robinson's 2312, released appropriately enough last year, is a great example of how to do truly futuristic social commentary. While the book is not without problems, I would say that one aspect of the story works phenomenally well - pointing out the ways future societies might be radically yet believably different from our own. 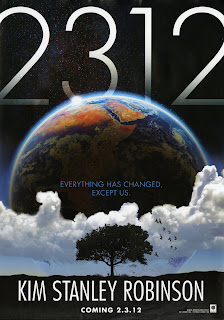 The novel is essentially a political thriller, beginning with the untimely death of the Swan Er Swan's mentor Alex on Mercury. Alex provided a message to Swan in the case of her death detailing some of her ongoing projects. In the wake of her death, acquaintances of Alex begin popping up, looking for their own posthumous instructions. Swan comes to understand her mentor was involved in a number of plots with system-wide implications.

Basically these plots center on two issues facing human civilization in the 24th century: the emergence of truly artificial intelligence in the form of qubes, or mininature quantum computers and the still miserable conditions of the citizens of Earth, beset by a witch's brew of the ancient inequities of fractured nation-states, climate change, and poverty.

Working with two of Alex's partners, a Saturnine politician Wahram and a diminutive detective Geller, Swan begins to piece together the entwined threads of these twin dilemma,  her efforts increasingly dangerous as she comes to understand the fates of worlds literally hangs in the balance.

If you've read Robinson's work before, you might suspect that I am paraphrasing the plot of the novel considerably. Which is true. While not exactly embracing a cast of thousands, 2312 has over six hundred pages of political machinations, ruminations on future space colonization and chapter-long expositions. Lots and lots of details to discern.

A reader of 2312 will either be entranced by these periodic interruptions detailing the way asteroids might be hollowed out and turned into terraria orbiting the solar system, Venus becomes terraformed, or the topography of Saturn's moons or else, he or she might skip through them. Personally I find this vision of a solar system gradually altered for human life enormously compelling and, even stirring. Robinson has always been at his best, as a writer, when drawing connections between history, sociology, economics, psychology, technology and astronomy. His vision of the future is not easily reducible, embracing a tremendous variation in life styles, physiologies, and philosophies of the future.

Just as the planets and moons surrounding the sun are altered and embroidered by human creativity, the human body becomes malleable and hackable. The predominant obsession of 24th century society is longevity. True immortality has not been accomplished but the life-spans of the characters have been greatly extended, one and two centuries in most cases. Much of the physical variation in the characters, extremely tall people versus extremely small, elective gender modification comes from a desire to make longer lives possible. This makes for a pluralistic society but also one just as suspicious of the margins of human life.

Swan, for example, is an artist, terraforming entire asteroids into living installation pieces, an impulse she carries towards her own body. In addition to giving her self male genitalia, she's also imbedded a near-sentient qube into her own skull, song-bird neural tissue grafts, and the alien bacteria discovered on a moon of Saturn. All of these experiments have made her suspicious to other characters in the stories, untrustworthy. This is an aspect of Robinson's world I found extremely believable. While the definition of human identity is broader than it is today, the compulsion to define is still present.

On a craft level, the book is not without flaws. The plot I sketched above is far from propulsive. It takes until the last quarter of the book before all of the various plots begin to coalesce into an actual crisis, something approaching action and conflict to appear. Most of the book is occupied by a strangely coy romance between Swan and Wahram, one conducted across a multitude of worlds and planetoids, accompanied with a virtual playlist of classical pieces Robinson basically recommends you read the book by. WHile he dialogue between the lovers is not without charm and sophistication, there are some real leaden scenes in the middle of the book. Some sections of conversation are so laughably fake, you wonder for a second if Robinson might be getting ready to reveal that all of the characters are actually quasi-sentient quantum computers. None of this is exactly a surprise if you've read Robinson's Mars Trilogy, and long-time readers have no doubt made their peace with the author's reliance on Big Ideas to move stories forward.

All in all, I recommend 2312 to fans of hard SF, and the under-represented genre of near-utopian speculation. This isn't a bad book for first-time readers of Robinson, either although Red Mars probably has a better balance of characters, plot, and technological explanation.