My spoiler-free review of Star Wars: The Force Awakened

December 19, 2015
Star Wars: The Force Awakened makes me care about Star Wars again. In a year filled with great science fiction and fantasy films, this movie finds its own special place.

The thing about thinking about an experience after you've had it, is that it is already an admixture - part of what you are feeling now will always affect what you thought you felt then. As best I can resurrect, what I felt watching Star Wars two nights ago was sheer joy. From the opening crawl to the final credits, I spent long, long moments completely immersed in this movie, completely enthralled. I liked a number of movies this year, but this might be the only one that grabbed my attention and never let go. Even Guardians of the Galaxy, which was an accomplished space opera, couldn't really match this movie's most effortless achievement - creating a whole bunch of characters I understood and cared about in a personal way. 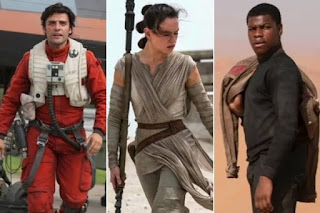 I think the first and most apparent level of this movie is that personal engagement. J.J. Abrams is unquestionably a fan of Star Wars and the attention to the details, easter-eggs, and mythos of the the Star Wars universe is all clearly on display. But it is also clear, having watched this film, that what Abrams most liked about the original franchise was its relationships between characters. By the half way mark of the movie, the characters were making jokes about these relationships (out of the way, ball), (Okay, big deal) that seemed to understand how real they were not only for the characters but for the audience as well. In a word this movie was self-assured.

These characters were, as has been mentioned before, a better mirror to the society we find ourselves in then the original or prequel trilogies. Rey, the plucky young heroine of the story, joins Finn as played by John Boyega and the smart-alecky Poe Dameron seem a nice cross-section of the demography likely to watch this movie. It is important that they are young because this movie hinges on such generational adjustments. One of the wiser elements of the story is how the evils and virtues embodied in previous movies by Darth Vader, Obi Wan Kenobi, Luke Skywalker, and Yoda are shown echoed in the struggles of the next generation. One aspect of the Return of the Jedi that I don't think could be really replicated in the current state of the world is the triumphant, "everybody's having a victory party" ending.  So, A Force Awakened presents us a world where the defeat of the Empire has given rise to the First Order, a military force with the stylistic choices of North Korea and the apocalyptic mind-set of Daesh. The Rebellion has given rise to a new Republic but also a scrappy and over-matched Resistance. (The relationship between these various powers is not well explained in the movie, I should point out.)

As my friend Dave Nurenberg mentioned in his review of the movie - a constant theme of this movie is the pressure for the younger generation to live up to the hopes of the previous. The principal villain, Kylo Ren, has an enormous chip on his shoulder regarding his role-model Darth Vader, displaying the same intolerance for failure as that earlier Sith Lord without any of his iron discipline. Rey remains on the barren junkyard planet Jakku to await the return of her family. Finn is the wayward son of the First Order, refusing to participate in a war-crime he attempts to get as far away from his "family" as possible. There are many, many other such echoes.

But these are masks.

I'm going to need another viewing before I settle on how this film approaches masks but even my first viewing convinced me this is one of the central themes of this film. Nearly every character enters this movie cloaked in some sort of disguise. Kylo Ren wears a sort of biker's helmet mixed with a welding mask, we first see Rei wearing a desert cloak that masks her face, and Finn is clad in the featureless white armor of the Storm-trooper. Then, one by one, we see each of these characters' faces and learn that that what's hidden below is quite different from our original impression. In particular, without giving to much away, Kylo Ren's reveal is particularly interesting. Masked Kylo Ren is a terrifying figure of shadowy malice. Kylo Ren unmasked is just as terrifying but for completely different reasons.

This is, of course, a theme of JJ's throughout his movies. His principal reoccurring motifs are disguises, redirections, and mind-games. This was true back in Alias, it threads through the third Mission Impossible movie, nearly sunk Into Darkness, but reaches a kind of maturity of craft in this film. In both big and small ways, the flawed but human individuals seem bound to the images in which they cloak themselves. The First Order cannot simply be a militaristic power, they must better the achievements of the original Empire. Finn is not simply a deserter but one who torn between being a "big deal," and fleeing from the trauma of his past. And Rey, who enters the movie as a down-trodden scrap collector, leaves the movie with a destiny and formidable heritage to confront.

Other story-telling tics of Abrams are less welcome here. While most of these concerns didn't really bother me until the next day - there are annoying details both big and small throughout the movie. JJ Abrams continues to value a mode of visual story-telling that privileges symbolic meaning over any need to follow established canon or real-world physics. Arguably these are the same issues in the original trilogy but Abrams wants to tell a bigger story than A New Hope at a much more frenetic pace. This means that we go from one or two characters trudging across vistas of empty desert, to scenes of space battles as replete with laser fire, dog-fighting space craft, and explosions as anything from the prequels. The difference is that while those epic set-pieces were Lucas' primary (only?) focus, here Abrams wants to keep his characters tightly foregrounded. Rather than using CGI robot versus clone battles as short-hand for galactic power shifts, now we have the processes of cataclysmic death machines dramatizing interpersonal conflicts. I know which of these I prefer, but there is a third way. The Empire Strikes Back seemed to understand how to balance the impulse toward character-based conflict and epic set-pieces much better.

Still, all told, it's nice to have a Star Wars movie back that seems worth the effort to think about.