How About Some Honesty

November 10, 2016
I've seen a lot of different reactions to the election so far, everything from the mass protests in major cities, suggestions for ensuring privacy for activists hoping to fight against Trump, apathy, anger at the DNC, anger at people who voted for third parties, and words offered of sincere encouragement and empathy.

To be honest all of this leave me feeling more angry than not.

I don't know anything about what's going on. I don't understand my country anymore or really the people who live in it. I thought I did, which is why I voted for Hillary. I thought she was just the sort of president we needed. We all lost something when Trump won; I've lost my faith in people who claim to know what's going to happen. Including myself.

Yeah, I probably should have come to this realization a lot sooner. After all, I am the most armchair of all armchair campaign managers. I don't go to rallies. I barely donate to causes. I don't really believe in causes to begin with. I am really nothing more than a reliable vote for Democrats and other progressives, assuming they want my vote.

Like the Onion article lampooned, I am that liberal white guy who enjoyed a pleasant dream for eight years that things were going to continue to get better, that eventually Republicans were going to drift back into line, and that everyone would see how much better things were getting.

I think part of moving on for Democrats has got to be trying to see the country for what it is. Things are not going well for most of the people who live here. People are putting on brave faces or drawing upon dwindling reserves of patience and goodwill or have simply lost hope. People don't vote for someone they don't like and don't think will do a good job because they have too many options. For a significant (and electorally sufficient) number of people, Trump was a walking, talking middle finger raised at what they hated.

So, I'm not going to smile and say things can change quickly. Yeah, maybe we can pick ourselves up and win the House in '18. Maybe we cobble together enough votes in 2020. But that doesn't even begin to address the real problem. Look at a county-by-county map of this country's voting patterns. 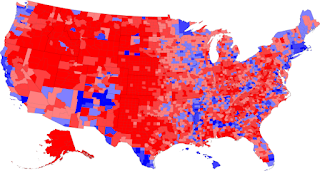 Sure, a map like this can be deceptive because it ignores the fact that each one of those islands of blue represents an urban concentration of considerable population. But that's the point. We have allowed ourselves to become walled off enclaves, unable to speak with the vast swaths of this country, pouring vast numbers of votes into the same deep blue districts. Let's be honest with ourselves. We are in a bad spot, with very few options, backed into a small corner. A lot of people were very, very wrong about this election and now we're all going to pay the price for a generation. Maybe taking a page from the other side in this situation wouldn't be a bad idea.

Don't just say no. Say hell no. To everything. To every proposal, every law, every initiative. Say no to every overture of compromise and each note of conciliation. What's the worst that could happen? We lose the House, Senate, Presidency and Supreme Court?