I've run into a problem. My current story's conflict doesn't quite have the punch I want it to. I've tried a few different methods to figure out what exactly is troubling the main character or what larger issues are in play, but I'm not there yet. While my story stews for awhile, I thought I'd talk about my dissatisfaction with the standard model of literary conflicts. In other words, let's talk shop.

Usually in literature we say conflict comes in four basic types: man versus nature, man versus man, man versus society and man versus self. This is the model I heard in school and this is the model I teach in my own literature class. You could throw in a few other types of conflicts, depending on the genre, conflict versus supernatural beings or conflict with technology. You might even subtract one of the categories due to ideological preference (Ayn Rand disliked the idea that nature had any choice in a story, big surprise). But for the most part these are the types of conflict you hear about. I'm not denigrating the idea of categories or even these particular choices; literature is complex and manifold, having a common language about literature helps when discussing it.

What has struck me this week, however, is how unhelpful these basic categories are when actually writing conflicts. I'm not sure the notion of man versus man really does much more than describe the participants in a conflict, it doesn't really address what the conflict is about.

What is conflict? All stories include descriptions of people, characters, with unmet needs. They can't love whom they wish, they can't get a job, they can't get away from a big scary monster. As the story traces the character's attempts to meet this need, conflicts are the obstacles preventing the character from achieving his aims. These needs can be tangible obviously: food, water, air and shelter, but they can also be more psychological. In horror, a monster is more or less 'real,' in that it has claws or sharp teeth or some other way of depriving a person of their ability to continue living. But as any fan of horror fiction knows, actually seeing the creature is never as scary as the suggestion that something menacing is out there, trying to get in. This is still essentially the same conflict, the character no longer feels safe and seeks someway to address the situation. Usually with an ax or flamethrower.

Those with a few psychology courses under their belts might recognize the basic pattern I'm driving at. Abraham Maslow was famous for describing a humanistic psychology, presenting the needs of individual in the form of a hierarchy. At the bottom are physiological needs: food, water and other basic necessities. Above that are safety needs: an individual seeks to be free of danger or the threat of danger. Beyond that are social needs, an individual should feel part of a larger community and accepted for his or her contributions. Ego needs come next, a healthy individual desires respect and esteem of peers. Finally, at the apex of the pyramid are self-actualization needs, the desire of an individual to become all that it is possible to be, to live to the fullest. 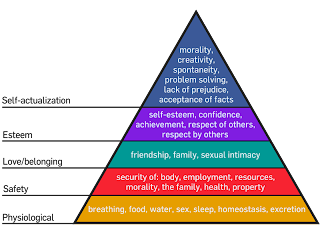 To me this is a more helpful framework for addressing conflict in a story. What does a character need? What is he trying to get?

At the most basic level a story can be about simple survival. I think this tends to be lumped into the man versus nature conflict in the classical arrangement but the conflict can be more dynamic. People or societies can deprive characters of what they need to survive. A character is attempting to survive by getting something that is lacked. Jack London's "To Build A Fire" is fine example of a survival story set in nature, "The Most Dangerous Game," a survival story against a human adversary.

Danger or menace forms the impetus for a safety conflict. When a character is threatened, he will attempt to remove that threat, either by escaping or directly confronting it. The point here is not that a danger is necessarily lethal but that it removes the basic need for humans to feel physically secure in their environment. Peter Straub's "Koko," a psychological thriller I reviewed last year, demonstrates this conflict masterfully. The killer kills, but the menace Koko represents drives the story forward.

Above that are questions of acceptance. Individuals desire different levels of belonging and social acceptance. Some can be perfectly happy with minimal human companionship, others have an instinctive need to gain the acceptance of the largest number of people possible. When society of a social group withholds this acceptance a character suffers. Ralph Emerson's "Invisible Man" is an  example springing to mind.

A character accepted by others can still have unmet needs if his own self-worth depends on the approval of others. Characters often experience conflict as they attempt to define themselves as a happy, functional human being separate from others. James Joyce's "Portrait of an Artist as Young Man," traces the progress of an individual gaining confidence to use his talents and abilities for his own purposes, showing the obstacles that society, human nature and his own traitorous mind throw in his path.

Finally a story might revolve around the more philosophical questions of what is the limit of an individual. What can a person achieve when all other needs are met? I think this is the most challenging conflict to describe obviously, creating a convincing psychology of a self-actualized individual while still keeping him interesting and compelling. Writers hoping to describe a true utopia face a similar challenge. I have a few examples of this type of conflict, Levin's introspective questing in "Anna Karenina" and also Olaf Stapledon's humanistic future histories: Last and First Men as well as Star Maker.

The point here is that the focus of these conflicts is not just on an individual, but of the idea of personhood as a whole. Humanistic psychology is an optimistic philosophy. People are inherently good, capable of redemption and growth. Literature, even something as humble as science fiction, can point in the direction of resolution and evolution.

In the next few postings I'm going to describe some other examples of Maslow's conflicts and try to work towards some idea of how this type of conflict works in practice.