February 10, 2013
While "Green Mars," didn't include nearly as much mind-blowing speculative awesomeness as the first book in Kim Stanley Robinson's Mars Trilogy, it did include one set-piece that I enjoyed very much: The Dorsa Brevia Declaration. 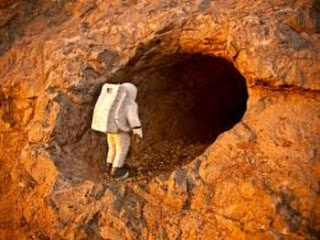 As mentioned in my review earlier this week, the plot of Green Mars focuses on the approach of a second Martian revolution. The first revolution, as described in Red Mars, was a spasm of senseless violence, mayhem, and targeted assassination, accomplishing little besides the deaths of many, many important characters in the story. As would-be revolutionaries gather in an enormous lava tube named Dorsa Brevia, the central question is how would any future revolution escape the fate of the first.

The process, which I'll describe below, was very familiar to me. During the course of my path to teaching history in Middle School, I worked at an afterschool program named Citizen Schools based in Boston. Citizen Schools had its ups and downs but I always appreciated its attempt to govern itself through a system of consensus. Consensus is more than simply having the majority outvoting a minority and bludgeoning it into submission and it's certainly not a vocal and connected minority imposing its will on the majority. A consensus is something like how New England town halls were supposed to run or meetings in the old Haudenosaunee nations. Rather than forcing some singular vision on how to decide a problem, a commitment is made that everyone in a group of people will agree to certain basic actions. Everyone. That's what consensus means. If something is too contentious for consensus to be reached than no action happens.

In Citizen Schools used the technique to build consensus from students on projects and classroom rules. Students would discuss a problem, while a facilitator wrote down the various possibilities. Redundancies were acknowledged and condensed, controversies recognized but not dwelled on. When done effectively, consensus building creates minimalist frameworks that everyone within a group agrees on and can operate under. This works. I've seen even middle school age children do this.

More recently, this type of decision making appeared in the Occupy movement. In addition to building make-shift communities on parkland, the Occupy movement employed a very inclusive form of direct democracy called General Assemblies. If you participated in the Occupy movement or watched any of the footage, you've probably seen how this works: a speaker will articulate issues under discussion and have have his or her words echoed by the assembly at large. Speakers are drawn from a 'stack,' or list of people wishing to be heard. A variety of hand signals indicate the acceptance, disapproval, or procedural requests coming from individuals within the assembly. The point of the system is that the methods employed by the Occupy Movement should reflect its ultimate aims, a democratization of the economy and social structures of all communities on Earth. A worthwhile goal and an instructive example of direct democracy in action.

Compared to the reality of the Occupy movement, the vision of consensus politics described in Green Mars is somewhat more traditional and structured. Basically, once groups from across Mars reached Dorsa Brevia, the Swiss organizers (a nod perhaps to the Swiss canton system of ) facilitated a convention discussing the issues and problems facing Mars as a whole. Terraforming, economic inequality, structure of post-revolution Mars society and methods of revolution were all separate workshops within the overall convention. Robinson gives a sampling of these workshops, describing some as inspirational and others riven by pointless controversy. However, the process succeeds even where the mechanics of the system falter. A final committee simply assembles all of the areas of agreement into a single seven point declaration. The declaration does no more than collect together the areas of agreement.

What gives the document power, in the narrative, and even, I would argue, beyond it, is the weight of its simplicity. As a declaration it is general, not specific, but succeeds in articulating something different from the reality of Mars up to that point. The Declaration represents a shift, a real change. I'll reprint those points below, not because (obviously) they represent some model for a society on Earth but rather because they evoke aspirations transcending a work of speculative fiction from the 90s, suggesting values for any future progressive society.

I'm not sure if General Assemblies or the Dorsa Brevia convention could ever serve as the practical basis for a society, making decisions for an entire community. But that's not the point of models. Models are experiments, speculations on how things might work given a certain set of values. What would the world be like if every voice was heard, every attempt at participation valued?


1. Mars will be a world of different cultures and religions; none should dominate over the other.
2. All individuals should have some inalienable rights: material existence, health care, education, legal equality.
3. The Martian land, air, water are common goods and cannot be owned.
4. The fruits of an individual's labor belong to this individual; Martian human labor is part of a communal enterprise; the Martian economic system should balance self-interest and the society's interests.
5. Martian economics will be based on ecologic science and should serve the prosperity of the entire biosphere; thus the metanational order is not sustainable.
6. The environmental alterations should be minimalist and ecopoetic; their goal should be to make the portion lower than 5 km above datum humanly viable, anything above (amounting to 30% of Mars's surface) will exist as natural wilderness zones.
7. The habitation of Mars is a first in human history and should serve as a precedent for human habitation of the solar system and for human relationship with the environment; a spirit of reverence should exist towards Mars and life in the universe.