For a night, I got to join the Resistance.

My friends have been playing Ingress, the augmented reality game Google launched a few months ago, nearly non-stop. As more and more of their time and attention bends towards a game that plays like a mash-up of capture the flag and geo-caching, I've become interested in the issues the game raises. And more than a little jealous that I went with an iPhone 4S in my last upgrade. But whatever. 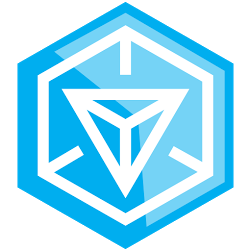 Our raid last night began the way any clandestine effort does, a covert marshelling of forces at a local safe house, in this case the apartment of one of my friends. Two smartphones fully charged and stocked with a supply of virtual munitions, +Morgan Rushing  and +Matthew McComb  set out onto the streets of Somerville, brazenly walking up to a quartet of portals (two Zipcar lots and a pair of local landmarks) and hacked them, flipping them from green 'Enlightened' control to the blue of the 'Resistance.' These factions have somewhat different backstories within the fiction of Ingress: the Enlightened is attempting to help alien 'shapers' alter the culture of humanity while the Resistence…well, resists.

The overlay isn't too important however, the point of the game being for members of the two factions to battle over these landmarks, first wearing down the defenses surrounding it before taking over the landmark. A successful hack garners rewards: experience points and various items that players might use to further control locations. The game has a simple advancement ladder, Matt is level 6, two away from the max. To me, the different levels offer differences quantitative not qualitative. A level one player has limited ability to hack and take over portals, the most powerful tools and locations out of reach. On the other side of the spectrum, a level 8 player has nearly unlimited potency within the game, able to flip portals and buttress territory with impunity. However, it's not like being level 8 offers you new powers or responsibilities: you are still in the same game, unable to bypass or change the basic set-up of the game.

Anyway, the experience of the game is what matters and here for me is really where the promise of the game materializes. This is a game that really gets people moving around their neighborhoods. Players must physically got to these locations and linger at them, usually in concert with teammates for several minutes. Buildings and obscure statues passed before in ignorance suddenly acquire real and practical significance. This locations must be claimed, controlled, and defended. In chilly February weather this is more of an ordeal that it sounds, but Ingress further encourages movement by making it necessary to hack several portals in order to take over territory. Another twist to the game is that the other faction receives an email when one of their portals flips, so they have an opportunity to come in an reclaim the location. While waiting for the hack of a Zipcar lot, an SUV pulled up on the far street, the engine idling. Was this simply someone waiting to pick up a friend from a nearby apartment or an Enlightened agent defending his turf?

Fortunately our band was reinforced with the addition of another friend +Alex LaHurreau who came fresh supplies: both virtual and actual in the form of a portable battery for his phone. Ingress uses impressive amounts of power through the constant use of GPS, animation heavy graphics, and data exchange. As our little band huddled together near the walls of the Somerville Arsenal, we eyed suspiciously the passers-by, especially those focused on their own smart-phones. Those with Android phones became possible opponents, those with iPhones, instantly invisible.

The whole experience of marching from corner to corner, tapping furiously away on hand-held devices triggered memories of my favorite show, The Wire. In season three, the most powerful drug organization, the Barksdale gang, loses its profitable turf in the project towers. As they move in on the street corners, running street battles break out as rivals gun for access to the newly ground-level market. There's something of that in Ingress. Players earn experience and equipment in hacking portals a feature of the game that encourages constant turn-over. One of the easiest ways to advance in the game is to set up a portal in enemy territory, watch it taken down by other players and then gain a bonus from reclaiming it.

This is something happening world-wide. Players have access to an 'intel map' that shows portals available across the globe, blue and green lights spreading across the continent as more and more players begin to claim virtual territory. There is apparently a movement to fund an expedition to the South Pole to claim the site. At the moment 79% of the world has been claimed by the Resistance, which either says something about the relative organization of that faction or perhaps some subterranean need right not to buck authority.

Eventually my friends depleted their resources and body heat and we ended the raid. An entire swath of territory now belonged to the Resistance, at least until Enlightened could must enough people to reclaim the land.

Where can this game go? I watched real-time the perils inherent in the expansion of the game and a reminder more than a few bugs need working out before this gets too big. Google recently signed an agreement with Zipcar to have all of the company's lots appear in the game as portals and inadvertently triggered a game-breaking exploit. In addition to expanding the locations available for hacking, the blocks of license plates the company bought out represent in-game resources for obtaining better weapons and access keys to portals. With instructions written in English, Mandarin and Arabic, players used the liberated numbers to gain virtual rewards. I do not envy the employees of Niantic coming into work on Monday tasked with fixing a game now convulsed in a suddenly resource-rich battlefield.

After my first raid, I was left with a few more reactions to the ideas in the game. For one thing, I'd like to see more factions in Ingress: the simple duality of Enlightened versus Resistance leaves me somewhat cold. I would also like the philosophies of the factions to inform the game-play more fully. Choosing a faction should have more bearing on how the game works for a player. Also, as I mentioned, there is nothing conceptually different from a low-level player and a higher-level player besides their access to more powerful weapons and material. What if the label 'portal' was more than simply surface detail? What if by hacking a portal a player could virtually step into an alternate reality, either a horizon realm controlled by the player and his/her faction or even more exotically, the terrain of some other planet. After all, the surface area of Mars is roughly equivalent to the land area of Earth. If people are seriously considering an expedition to the South Pole to hack a portal, how cool would it be if they could conquer Olympus Mons or battle over Valles Marinaris. Why stop there? Throw in fictional worlds and players could restage the Battle of Pelanor Fields or the invasion of Hoth.

Morgan Crooks said…
Oops! Thanks for the catch and thanks for reading. I hope I get another chance soon, it was a blast.
February 3, 2013 at 5:07 PM

Dusty Jewett said…
Morgan: I had thought your use of the word "Establishment" was intentional, and I wrote this while thinking about it.

Morgan Crooks said…
As I said on your G+ post, I think this was a very insightful take on my obvious blooper. Thanks for caring enough to reply!
February 4, 2013 at 3:38 PM