June 09, 2013
I've been on a bit of a television watching binge lately and after burning my way across 14 seasons of Star Trek, the 15 episodes of Arrested Development's newest season (available through Netflix) offered the grand luxury of a succinct story fully told. 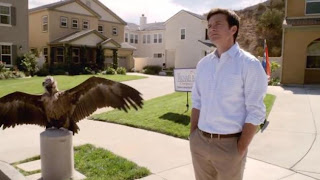 For those with exposure to this show, the adjective 'succinct' might seem a bit of stretch. Afterall, the interweaving, interposed, constantly self-referential hyper-linked narrative following 10 main characters is, in a word, exhausting. But it also carries with it the sense of a the shortest possible route between two points. Each of the episodes follows one of the main characters as they trace the bleak wreckage of their lives from the moments immediately after the Bluth matriarch Lucille (hilariously venomous Jessica Walters) hijacked a cruise ship in order to escape arrest. What makes the season interesting (and hard to review without spoilers) is that each of these narratives flows in and out of the others. You might see one scene through the Michael's eyes (the basically sympathetic protagonist of the series played by Jason Bateman) and then later see it in a completely new light depicted in Lindsay's (Michael's step-sister) episodes.

I think this aspect of the show is somewhat off-putting, at least in first few episodes. Weird things happen or go unexplained that only make sense much later in the overall arc of the story. I've seen a lot of partial reviews of the overall season that pick apart quality concerns of the first three or so episodes. I would suggest if you are at all serious about the show, give it until at least episode six before you line-up the firing squad. The best jokes do not pay out in the first episode they are introduced but rather gather weight with each reappearance. Every random band-aid, bare pair of legs, ostrich head and bizarre hallucination has some larger story to tell.

It helps that the story is familiar even while it heads off into new directions. Michael is still trying to win himself a measure of self-respect from a family whose primary area of leverage over him is denying just that. Each of the children of George and Lucille Bluth is attempting, like always, to define themselves as separate from the same dysfunction they secretly thrive on. Lindsay and Tobias divorce again, Maeby is ignored again, Gob flounders as a magician again. The biggest character development comes from George-Michael, who briefly (?) becomes an internet start-up magnate, dating movie stars and doing a decent impression of Mark Zuckerberg acting as himself in the version of "Social Network," he'll bank roll in 2014.

It's the details though that makes this show great, the running gags and easter eggs. Here an entire subterranean universe opens up with each episode, each casual reference its own ridiculous world slotted neatly into the rest of AD's alternate reality. Arrested Development is a wiki site in television form, each page is connected to the other, each word and image a holographic version of the whole.

All of this comes to a head in the Cinco de Cuatro (a holiday created by the xenophobic elder Bluths in a fit of pique). All of the various plots and schemes from Tobias' musical version of Fantastic Four, a drive to build a wall on the Mexican border, Michael's continued determination to save the family, a terrorist plot and Buster's freakish prosthetic limb all click together. Lives are shattered, dreams dashed, illusions flubbed.

Season four is a little like watching a tornado obliterate some house, only to have those same splinters reassemble into the exact same house a moment later.