July 23, 2016
Setting aside hype and concerns, I think my basic reaction to the new Star Trek movie, Star Trek Beyond was, oh so that's what a decent Star Trek episode would be like as a movie. Your reaction to the new movie will probably depend a great deal on whether or not you can make your peace with Star Trek as a summer sci-fi thriller. 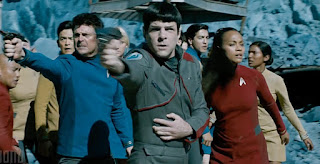 When the first trailer for Beyond dropped earlier this year, I told friends that this was exactly what I thought a trailer for a movie directed by the guy from the Fast and Furious franchise would look like. I was not excited.

Having watched the movie, I would say pretty much the same thing but add that's not necessarily a bad thing.

Justin Lin has a rep for focusing on ensemble character interactions and kinetic action sequences. That's what you get in this movie. Beyond is strongest when the superb cast is together in various combinations, talking, arguing, and working to solve their problems. It gets a little muddled as the scale of action increases, when a hokey species of pandering takes hold, but on the level of a couple of people fighting or chasing each other or falling through a collapsing starship - this stuff pops.

Of all of the Kelvin Timeline movies, this one felt closest to the original feel of Star Trek in the television series. Although the movie is full length, and features impressive scenes of destruction and mayhem, its stream-lined plot is focused on a single threat and the efforts to defeat it. This is a smart decision. Almost all of the original cast gets a nice, fully formed character arc and even the new characters have their moments. I'm always a fan of simple things down relatively well. In the original series that was episodes like "Errand of Mercy," "The Galileo Seven," and "Shore Leave," stories that weren't always as profound as Trek's later reputation would suggest but were nevertheless a lot of fun.

Also - and this is an ongoing strength of the Kelvin Timeline movies - the casting is fantastic. Zachary Quinto (Spock) and Karl Urban (McCoy) finally get to spar for an extended period of time while marooned together on an alien world and really sell the idea of a prickly although fundamentally strong friendship. Chris Pine's Captain Kirk has been hit or miss for me, but this movie finally seems to hit his stride as a risk-taker who feels his moment slipping away from him, a leader in search of a cause. The focus on his efforts to meet the challenge basically carries the film through any slow patch.

Finally, although I like Benedict Cumberbatch's villain very much in Into Darkness, I have to give Idris Elba credit where credit is due. He's not my favorite Trek villain, but the unique motivations he brings to the role, steeped in an impressive amount of Trek lore, worked well.

Even though this was the first film to not feature an onscreen cameo from a Trek alumnus, this did feel like a movie genuinely interested in working with the lore of the series in interesting ways. The references to "Green Hands," and "Romulan Wars" were pitched at exactly the right tone - not gratuitous fan-service but references to things with direct bearing on the action at hand.

There are a few casual nods to Big Ideas like unity of purpose through friendship and respect versus strength developed through struggle and conflict. All of the Kelvin Timeline movies focus intently on the question of whether or not peaceful exploration of the galaxy is even possible and that thread continues here with mixed results. This is a movie about the characters and the question of whether they can pull themselves back together. It's a simple sentiment and one that I imagine will translate well in whatever language it's uttered. Which, in this age of globalized entertainment, is not an idle gesture. A movie like Beyond will rise or fall on the ability of foreign markets to buy into its vision of a utopian future.

As mentioned above, the movie has some significant defects. My friend Matt noted the preponderance of shaky camera-work during action sequences and I thought several big moments in the film were marred by corny decisions. Although I think Simon Pegg's script was very good, he can hit the anachronistic pop culture reference button as hard as anyone in the business.

Overall, I'm listing this as a must-see. It's one of the better Trek films, maybe a bit better than the first reboot movie, better than all of the Next Gen movies except for First Contact. I still find myself wanting to know what happens to this crew and where they go next.