"The Brief Wondrous Life of Oscar Wao" by Junot Diaz

September 27, 2016
For the most part I'm comfortable with a choice I've made for this blog. As some commenters have already noted, I'm more of a praiser than a critic. I like what I like and I tend to write posts about things I think are stupendous, amazing, and life-affirming. 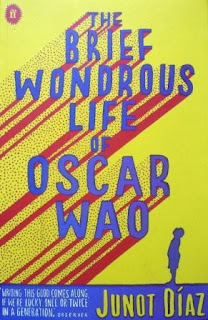 Then I read a novel like Junot Diaz' "The Brief and Wondrous Life of Oscar Wao," and I feel like I've run out of credible accolades.

I've been casting about this year for main-stream, contemporary fiction books to read. Partly I felt it was time to branch out a little bit after three (five? 10?) years of hard-core speculative reading habits. Partly I thought it was my responsibility after taking the reins as facilitator for my local library writing workshop. Some of the participants write speculative fiction but most don't. Broadening the references I could use to critique stories seemed wise.

So, I did what I usually do in these situations, google the top 10 best novels of the past decade. Or maybe of the 21st century, I'm not too sure. Whatever the list was, I scoped out a local library's audio book stacks, trying to find one of the modern classics. For the most part none of the books on the list were available. That makes me all the more fortunate.

The book that was there, Junot Diaz's, was perfect. Now, I have read his work before, I wasn't wading into this book completely blind. A few of his stories, particularly ones from "This is How You Lose Her," get raised up as exemplars in creative writing classes. They struck me, in previous encounters, as gritty and genuine but not where I was at the time.

"Oscar Wao" is where I am, have been, and probably always will be. The pitch blurb for the book got me immediately. Oscar Wao is a 300 lb. Dominican American with a complicated family life (to say the least) and a need to become the next J.R.R. Tolkien and find true, enduring love. His story is told, in part, by his frenemy from college, "Junior." Through Junior's eyes, Oscar becomes something more than simply a sad pity case, he becomes the symbol of all that connects two countries, two states of being, two individuals, and two existences. Oscar Wao is symbol of transformation and hope but also the ceaseless misery that comes from not really being part of any one world. The book is profane, heart-felt, merciless, empathic, epic, and almost unbearably raw. It is simply one of the best things that I've ever read.

A new chapter of Agent Shield and Spaceman is now available. For those keeping score, I've now reached the 33rd chapter of the story, which according to my novel outline is past the half way mark. I'd take that with a grain of salt. I've already added a couple of chapters and might do so again if the story demands it. But still, I feel as though I'm reaching a kind of inflection point for the story. Thank you for reading and, as always, feedback is encouraged.