Review of "Ghost in the Shell"

April 02, 2017
I saw "Ghost in the Shell," on Friday and overall I think I'd recommend it. There are plenty of cyberpunk or influence-by-cyberpunk movies coming out this year but I think this will carve out its own distinct niche: stylish, garishly beautiful in places but ultimately middling science fiction. 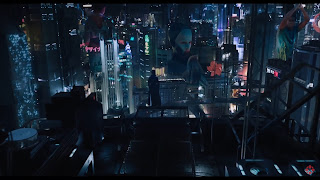 Things I liked: the action scenes are very cool, sharply executed, and kinetic. It gave me the impression that the director Rupert Sanders has spent some quality time watching the first John Wick movie, which I mean as a compliment. The version of the future here is neon-drenched and weird, with enormous holograms peeking out from behind sky-scrapers kaiju style. The streets crawl with criminal low-lives, augmented with ghastly prosthetics and weaponry, and everything is sort of splashed on the screen without exposition. For some one raised on Ghost in the Shell, Akira, and Neuromancer the effect was strangely comforting - ah, here's the future I was promised! - but I could also imagine someone else being frustrated by the movie's approach. A larger issue is the 'white-washing' controversy. Unfortunately talking about this in any detail is going to get into SPOILER territory.

In the manga and subsequent anime, the main character Motoko "Major" Kusanagi is depicted as Japanese. So, is casting Scarlett Johansson an act of cultural appropriation? Having seen the film, I would say it's a bit complicated but the way the movie addresses the issue does represent a real missed opportunity. While the synthetic body that Motoko uses is caucasian, it is revealed later on that that body is a 'shell' for her true identity. Her original, natural identity was Japanese but her ghost was placed into a caucasian body. Nothing more is made of this other than Motoko's pre-prosthetic existence was considerably richer and more detailed than her spartan, narrow life in the movie.

A smarter, more daring movie would have made a point of exploring this. Why is the default model of prosthesis white? Could this movie even draw a parallel between how the mainstream in our own society is often narrowly defined as being 'white?' so much so that a caucasian actress is cast in a role very specifically written as Japanese in comics, television shows, and movies? The more I think about it, the more cynical this ploy feels - just because Motoko becomes white because of the company that built her wanted her that way doesn't really bring into question why the director and the various production companies made exactly the same choice in bringing the source material to a (larger) Western audience.

This lack of daring also extends to my basic impression of the movie's theme. Where are the big risks? This movie acts as a shadow play of the original movie, performing the big set-piece scenes and updating the special effects without really understanding what those scenes mean. Borrowing insight from a Youtube video about the necessity of "Return of the King's" many endings, a story really has two types of endings: the plot ending and the thematic ending. In the plot ending, the sources of conflict are resolved. The main villain is defeated, the estranged mother and daughter are reconciled, and the forgetful fish finds her true parents. But stories also have thematic endings: the point in a story in which the overall meaning of the story is fixed into place.

In both the original GitS anime movie and this current version, the plot ends in a climatic battle with a 'spiderbot,' a bad-assed piece of military technology intent on killing Motoko. With great sacrifice, Motoko prevails. Cue credits. Now, to give the current movie its due, this set-piece is executed with aplomb and is pretty entertaining. But that's all ultimately it is.

The original also included a long monologue about the nature of consciousness and the importance of evolution that ended up convincing Motoko to join the "Puppetmaster" (as the antagonist in the original was named) in uploading to cyberspace, fusing together in a new hybrid existence. Powerful stuff that both elaborated upon the themes of machines and humanity merging and complicated it by suggesting that perhaps Motoko was never really that different from a machine in the first place.

Where is the effort to introduce something new? To explore some new corner of cybernetic philosophy or perhaps question more completely what it means to live in a world where memories can be erased and replaced at will? Maybe that's a lot to ask from a Hollywood action flick but it is precisely this that the original delivered twenty-two years ago.

Anyway, the best thing I can say about this movie is it was entertaining and while I sincerely hope it is not the best sci fi movie released this year, it's worth a watch.