September 10, 2017
My fandom of Stephen King and his adaptions is complicated by the sheer volume of his work. King has written some of my favorite books of all time (Pet Semetary and The Stand) and others I can barely believe I read five pages through. 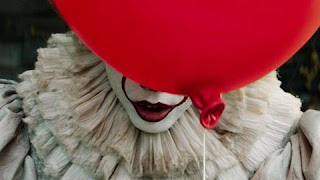 However, no matter what I or anyone might say, King is an unescapable fixture in the world of 20th century and 21st century literature. Most of the people I've ever met have read at least one of his books and I generally find it's a good sign if a person has read a bunch of them.

"IT," in particular, occupies a special place in my mind. It was one of the first adult books I read as a kid - way back in the summer of sixth grade at summer camp. I didn't understand all of it on a conscious level but experienced it on a deeper, emotional level. The story of a gang of 'losers,' desperately trying to survive in the face of indifferent adults, hostile bullies, and a monstrous clown made a great deal of sense to me. As in, I didn't so much read this as 'horror,' but slight hyperbole.

I watched the miniseries and was left feeling something I was to experience repeatedly with King's adaptions: they didn't quite get it. The parts that felt closest to the books didn't work as well, and the parts that worked best - Tim Curry's gleefully hammy take on Pennywise  -were different from the book.

It is undeniable that great movies have been made from King's works and some of them were actually quite close to the source material. However, in general, the folksy, profane and at times lurid style King uses in describing the day-to-day existence of people tends not to translate well to the screen.

This current adaption falls into the mid-realm of adaptions. The parts that work take the best of a very long book, boil it down into a convincing coming-of-age story and mix enough spooky bits to more-or-less evoke the atmosphere and tone of the original novels. In particular I like the final lair of Pennywise which, although different from how it's described in the book, is nevertheless unearthly enough to suggest King's macroverse.

As a whole, I don't have any complaints with the concept of Pennywise or Bill Skarsgard's take on the character. Instead of going cruel and campy, Skarsgard conjures something feral and somewhat pathetic - like a tiger that goes man-eater because in its advance age that's the easiest prey available. One of the better decisions here is to not fully reveal what 'IT' is but only suggest the truth in the final confrontation. It left me interested to see what this creative team does with the macroverse version of the creature.

What tugs me away from unreservedly loving this film has to with very specific choices made in the story which, while defensible in the service of getting the basic lines of the story told, nevertheless subtract from my personal enjoyment of the work. First off, Mike's story is particularly stream-lined in this version. As the only person of color in the movie who has more than a couple of lines, this is a particularly unfortunate decision. If you're already updating this work to 1989, why not either flesh out Mike's role a bit or switch a few of the other characters away from the usual cis white male pantheon?

This movie also leans hard on the jump scares. Now, this is one of those complaints that always seems like a short-hand for larger complaints about a horror movie. "Oh, I didn't like that one because of all the jump-scares." But the fact remains, horror is more than simply the limbic jolt one gets from a monster charging the screen. Horror dwells in the foreknowledge of unpleasant fates. The scare at the end of a death scene should be the resolution, not the climax.

Also, why does Beverly need to get rescued at the end? I know why but in the same year that gave us Wonder Woman, my patience for endamseling the only strong female character in a story is near nil. Just as a mental exercise, wouldn't it be more interesting if the two skeptical characters - Richie or Stan - got nabbed? I'm not sure this sub-plot was necessary to begin with but why not mix up things up a bit?