Thoughts on Promontory and "A Breath from the Sky"

September 05, 2017
Last month, my story "Promontory" appeared in Martian Migraine's "A Breath from the Sky" anthology. Promontory concerns a college president, Joseph Serrick, and his attempt to die in a way he could live with. At some point in the past, Serrick became the host for an ancient and possible extraterrestrial parasitic colony, their puppet in matters concerning the world surrounding a small forked lake in Upstate New York. I wrote the story as a reaction to a very real college president I'll leave unnamed here, who in addition to fostering a toxic environment for decades at the university he presided over, was a student of Immanuel Kant. 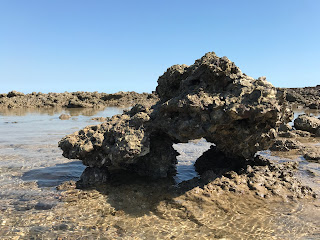 The paradox of a person dedicated to the philosophy of benevolence and self-agency also being a petty and tyrannical boss got me thinking about writing a mythos style story. Initially, the president character was meant to be the behind-the-scenes villain, seen only in the last few paragraphs of the story. But the story, at least in its initial drafts, really didn't work. I wanted to know why the president was acting the way he was and didn't feel his monologue at the end of the story cut it. So the next few drafts shifted the focus to Joseph Serrick. These worked better but didn't quite have the focus to make the story work until my friend Nick Mancuso (the organizer of a creative workshop I later took over facilitating) pointed out this story could really benefit from a 'locked room' set-up: in other words, having all of the action taking place in Serrick's office.

The result is a story I'm truly proud of. From the main character's genuine struggle, setting in Upstate New York, and the gestures towards body horror, this is a story that's pretty reflective of where I'm hoping to go with my horror writing. I hope you enjoy it but the nice thing about having it included in an anthology of this caliber is that even if you don't like my story there's plenty of others to choose from.