Review of R. Scott Bakker's The Darkness That Comes Before

March 06, 2013
First, a word about how I came to pick up the first novel in R. Scott Bakker's The Prince of Nothing historical fantasy series. In short, after finishing "A Dance with Dragons," by George R.R. I googled what should I read next. This series came up.

I mention this because it might serve as a usual gauge for what to expect from "The Darkness That Came Before;" people liking Martin's mix of history, in-depth characterization, dark subject matter, and world-building will probably like Bakker's work. People not fond of entire chapters devoted to the Byzantine political maneuvers, a dozen pages of appendices on characters, maps, and language trees, or character names with umlauts should avoid this book. 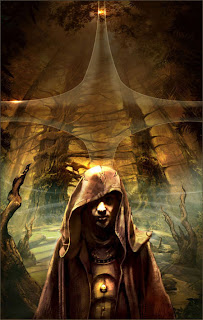 Basically, the story of 'The Darkness That Comes Before," follows a warrior monk by the name of Anasürimbur Kellhus, who during a quest to find his father, becomes entwined with a Holy War against a nation of fanatical monotheists. The story is told from a variety of perspectives, including Kellhus, a Mandate sorcerer Drusas Achamian, a prostitute Esmenet, a concubine Sërwe, and a savage barbarian warrior named Cnaiür urs Skiötha, all painting a picture of a colossal war spanning countries and continents. Most of the novel follows closely the perceptions of one of these main characters but occasionally the narrative pulls back into a quasi-historical voice, describing the vast scope of hundreds of thousands of men on a march towards war.

The main conflict of the novel is whether or not Kellhus can successfully bend a massive crusade to his own intensely personal goals. That such as a task could even seem possible is a tribute to the descriptive talents of Bakker. Kellhus is a character very different from any I've read about in fantasy books, born into a monastic civilization, raised from an early age to use hyper-rationalism, appraisal of causes and effects and a deep philosophy of psychological motivations to bend the minds of others to his will. Kellhus is not, in short, a hero but rather a master manipulator in the speculative tradition of Tyrion Lannister, Kvothe, and Socrates. The pleasure in reading his parts of the story is in observing a brilliantly amoral mind move the other characters around like pieces on a huge chess board. These are also the sections of the novel that feel the freshest, almost as if Asimov's notion of psychohistory was reskinned in the politics of Emperor Justinian's reign.

But its this idea of a refigured Crusade that resonates. Although claiming Tolkien as an influence, Bakker's grasp of the slippery nature of history (whose history? And for what purpose?) far exceeds his teacher's. While never allowing his world to slip into easy parallels with Earth's history, the tale of soldiers of many kingdoms inspired to war by a messianic spiritual leader (not Kellhus, incidentally) works because of the echoes of distant crusades. The politics surrounding this Holy War feel complicated and authentic, the personalities engaged in the conflict at odds with each other as much as any foreign target. Within a world upended by entire nations armed, on the march, the expectations of narrative become unstable, unpredictable. Telling this story through various perspective is the correct story-telling choice.

The perspectives we follow in the story are skewed in a certain direction, however. Along with the icy rationalism of Kellhus, we have the mage Achamian and the barbarian Cnaiür, both men of action and motion. There are a grand total of three female characters with significant roles in a story with dozens of other characters. As introduced above, two of the characters are defined their relationships with men and the third is a depraved sociopath. Bakker paints in grim chiaroscuro but I wish there was more room in his vision for what the rest of his world is doing besides marching to war.

Ultimately, though this is a single complaint and not a deal-breaker. The world of "The Darkness That Comes Before," is original, compelling, and addictive. Readers looking for something with the dark grandeur of the Song of Ice and Fire could do far worse than pick up this volume.