For me, "Cause and Effect," an episode late in the fifth season, offers a rare glimpse into the series' emerging self-awareness. Although the show flirted with continuity (even as far back as the "Conspiracy" arc previewed in "Coming of Age"), it's interesting to think of this time-warping episode as a moment of clarity about the nature of procedural episodic drama. 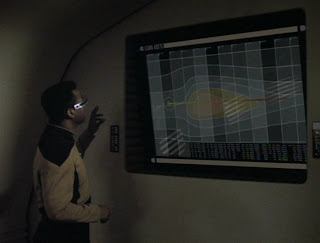 Procedural dramas, contrasted with serial television, are shows composed of stand-alone episodes, where each story can be understood basically on its own terms. The characters might reappear, their traits consistent from one story to the next, but the events of one story only rarely impinge upon the events of the next. Episodic series are often formulaic, relying on resolutions that neatly tie up all of the loose ends into a neat and tidy denouement  This is obviously a very common device in television shows, particularly sitcoms. It is harder to attract new viewers to a show with pervasive continuity, the effort of catching up with continuing story-lines too daunting. So even in these relatively more sophisticated times, episodic television survives on, popular in all sorts of police procedurals and comedies. Really, not everything needs to have an over-arching story to go along with it.

However, science fiction generally, and space opera specifically, really benefits from a greater degree of continuity, or at least an awareness of what has come before. If you are going to invest time in learning a new lingo and the relationships of various fictional alien races, it's nice to know that the whole artifice isn't going to be upended with the next story line.

Here is where The Next Generation does show its age. After enjoying the tangled and intricate plots of Battlestar Galactica or Deep Space Nine, it's hard to approach episodes with liberal applications of the reset button seriously. How much can we invest in the monster of the week if we're pretty sure this foe will never threaten our heroes again? How much can we care about a romance if we know this guest star will be shipping out at the end of the episode? I thought it was interesting "Emmassary" (DS9's pilot) spent so much time with Sisqo explaining the nature of linear time to the aliens of the wormhole, as if patiently instructing the viewers on the virtues of a strange alternate reality where the actions of one moment would have a bearing on the future. Exotic!

I'd like to suggest that one of the reasons "Cause and Effect" is an effective and memorable episode is that it takes place within the context of a show where cause and effect is so conspicuously absent. Basically this entire episode is a parody of the hard reset of every Star Trek procedural, where once the credits roll, the characters resume their lives without any memory of what just transpired. Only instead of taking 45 minutes to tell that story, this episode takes just 12.

One has to watch a number of Star Trek episodes back-to-back to appreciate just how jarring this is. The Next Generation adopted fairly early on a formal and stately pacing. The problem is introduced in the first five minutes, the crew discussed the problem in a meeting and makes a few desultory attempts to resolve it. They fail, the problem escalates, threatens the crew, the ship, or the universe, until finally one of the characters begins spouting gibberish until the problem disappears, usually after some special effects.

But here, the cold start hasn't introduced a conflict. It's resolved it. The Enterprise has already been hit, damaged severely, and in the midst of a warp core breach. Then it explodes.

When we get back from the main credits, we're watching four of the main characters, Crusher, Data, Worf and Riker playing poker. Having the characters playing poker highlights the self-referential them of this episode. We've already seen this ongoing poker game again and again throughout the run of the series, and would even serve as the last shot in "All Good Things…" But a motif is not continuity. In Next Gen stories, the specific players of the game might change but there wasn't much sense of who was winning overall. Riker was always a formidable bluffer, Worf an intense strategist, and Data, the dealer. And that's basically how the game goes here, except Dr. Crusher seems oddly distracted during the game, suddenly seized by a sense of deja vu. Then she treats Geordi LaForge after he experiences a moment of vertigo. Later on that same day, Crusher awakens suddenly when her cabin is invaded by a chorus of whispers within her cabin. She attempts to shake off the experience during a staff meeting but is unsuccessful. Later, the ship encounters a spatial anomaly, loses power as another ship emerges from a rift. The mysterious ship clips one of the Enterprise's pylons, ultimately causing the ship to explode in exactly the same way seen in the teaser. "All hands, abandon Ship!"

Except they can't. After the commercial, the show proceeds through these same events again, with Crusher becoming increasingly disturbed by the premonitions that this has all happened before, premonitions that do little to prevent the Enterprise from again exploding. And then exploding again. But in each of the iterations, a little bit of knowledge escapes the disaster, first as vague deja vu, then as a recorded whispers from the doomed crew, and finally as a simple message relayed to Data's positronic net. Eventually Data is able to use this information relayed from previous loops to prevent disaster.

It's this process of little details accruing after each retelling of the story that really sells this episode. While the story is one more example of fifth season "ship-in-peril" stories, it's different because the crew is able to communicate past the reset button. Who knows if this was an intentional metatextual element of the story, but within the context of the show as a whole, it certainly works at that level. Having sitcom actor Kelsey Grammar as a guest star appearing in the last few minutes, only adds an extra wink to the punchline.

This one episode is the series in miniature, or at least that portion of the series that proceeds episodically from one problem to the other with no awareness that any of the various technobabble catastrophes or technobabble solutions have the slightest precedent.

So, perhaps it's a happy coincidence that the fifth season also gave us "The Inner Light," which has all of the markings of a self-contained, what's the point? episode except for the fact that the effect of this story persists for sometime afterwards. As mentioned in a previous post, this episode finds Captain Picard trapped within a virtual world where he lives out his entire life as an alien in a doomed alien culture. At the end, he awakes from his dream as a man living on Kataan and resumes his role as captain of the Enterprise. Except, at that last scene, he picks up a flute, an instrument he had spent his entire virtual life learning to play, and he plays a simple alien tune. What he experienced in that alien life has remained with him. This idea of the Ressikan flute would appear in a few later episodes, most delightfully in "Lessons," where Picard revisits his feelings about his alternate life and plays a duet with it.

Of course there are other places where continuity exists in Next Gen as well, most prominently with Q and the Borg, but also in the Klingon politics arc and Data's slowly evolving quest to understand humanity. But these moments, for me, never really leave the world sketched out by "Cause and Effect," tiny messages inserted during the repetitions, pointing towards a final escape.