December 22, 2012
Yesterday, Wayne LaPierre, president of the National Rifle Association gave his organization's prescription for solving the epidemic of gun violence in this country. As you no doubt know, Wayne's idea is recruiting armed guards for all of the nation's schools. Now, with an exaggerated attempt towards fairness, 40% of this nation's high school's have at least a part-time presence of armed guards or school resource officers. The NRA's proposal would go far beyond that, however, calling for retired military personnel and police officers at all schools, around the clock. I saw the figure of $80,000 to fund a full-time security professional for the 40+ hours necessary to watch out for armed shooters.

"The only thing that can stop a bad guy with a gun is a good guy with a gun," is probably the one quote destined live beyond this poorly received press event.

I'll say one thing for the utterance above, it has the virtue of simplicity. Mind-numbing, infuriating, bib-wearing simplicity. Like all absolutists, the great intellects of the NRA have trouble thinking through the implications of their ideas or even the short-comings. As one blogger pointed out there are any number of examples of bad guys with guns proceeding unstopped during a massacre, even when confronted with a good guy with a gun: a school officer exchanged fire with one of the shooters at Columbine. Then let's turn to the other big news story on the national scene this week: the failure of the Republicans to deal with the Fiscal Cliff. Where does Wayne think the money for armed guards for every school in the country is going to come from?

Let's not even grace this as a rhetorical question. The point of the NRA presser was never to contribute in a meaningful conversation on gun control. At best Friday was the airing of collective delusions, at worst it's a variation on NRA's successful blueprint on combatting meaningful reform for the past two decades. Take no responsibility for the situation, blame everyone else, throw some crazy idea, like chum out into the water, to provoke the sound and fury of debate. Sit back while status quo reasserts itself.

But I'd like to advance one more reaction I haven't seen anywhere else. The NRA's proposal should be taken as a serious policy initiative from the pro-Dark Ages faction of our society. During the Roman Empire's long decline, the frontier was increasingly left to its own devices. The Roman Army degerated into collections of mercenaries and local warlords. The equipment and training left behind Rome's retreat became the power centers of the Visigoth, Hun, and Frankish feudalism. When you cast a central authority as the enemy and work tirelessly to militarize the fringes of civilization, you cannot be on the side of light and understanding. The NRA is an agent of chaos, disorder, and barbarism. 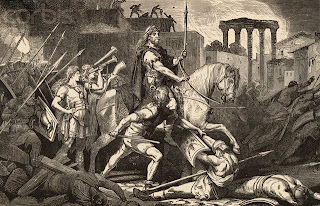 But at least they have shown a remarkable consistency in their vision. Stand-your-ground and concealed weapons laws and now ranks of mercenaries in school buildings; this is a vision of a society atomized into paranoid armed camps. You have to wonder what this country would be like if the amount of money devoted to destroying society was spent instead on reconstructing it.