December 09, 2012
Endings. A story doesn't end until it's ready but sometimes that ending's already happened. I realized that today in finishing my current story, which has the provisional title of "Broken Symmetry." My outline detailed a certain ending and plotted out every encounter backwards from that conclusion. Then I finished a certain section and realized, hey! this is a perfectly fine ending. All of the threads have come back. We've seen who the characters are. We perhaps don't know exactly what's going to happen to them, but we have a good idea. Better yet, the place I chose to end the story felt slightly off-balance, like the story could go on but the meaning of the story had already arrived. 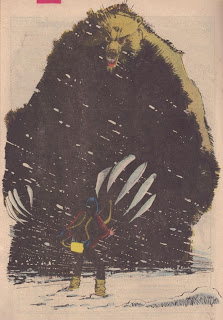 My Platonic ideal of endings begins and ends with the final three pages of "The Bear" by William Faulkner. In the conclusion, Boon Hogganbeck, a rough and ready hunter in the service of the narrator's father, has come across a tree full of squirrels. His gun has jammed and while he labors to clean it, the squirrels run to and fro around the tree. Boon tells the narrator not shoot any of the squirrels. "They're mine!"The moment is a fractal piece of the entirety of the rest of the story. Boon is the hunter who finally puts the blade to the monstrous Old Ben, a bear terrorizing the narrator's ancestral hunting woods. The trees are a final remnant of the woods, already under threat of roads and the loggers they'll bring. So the image dramatizes the comical futility in laying claim to nature. The tree and its squirrels are pathetic shadows of what once stalked the woods. Boon too, before heroic in the narrator's young eyes, has become a pitiful clown. Faulkner suggests that what makes a person great is the act of conquering something equally great, but that this vanquishment simultaneously diminishes the person who achieved it.

That's my clumsy attempt at reduction, anyway. All of what I've put down is expressed in full only in that final image. But consider the ending from another vantage point, what the ending accomplishes in pragmatic terms. Rather than wrap up the main story, this ending does the necessary task of summing up what the story is about and leaving some image in the reader's mind so inescapably wrong that it complicates everything that came before it. And yet, having read the story, Faulkner's ending couldn't possibly be anything but what he writes it to be.

I'd say that last part also applies to Red Mars, my topic for the past few postings. Obviously, spoilers ahead. The ending of that novel has the survivors of the original hundred settlers reach the the South Martian pole where the so called Hidden Colony has established a refuge in the wake of the Martian colony's catastrophic rebellion. Really by the two-thirds mark of the story, it's blazingly obvious where things are going. The revolt, as portrayed by Robinson, is essentially an hurricane of violence and destruction accomplishing little aside from the deaths of thousands. By its conclusion, there is no longer as safe place on Mars for the original settlers, as they realize the transnational corporations are slowly hunting down each of the Hundred to make the post-rebellion Mars an easier place to govern. The characters aren't going to be leaving Mars and readers know that this refuge exists from a very early stage in the story. So the tension in the closing chapter of the book revolves only around the question of who will survive with one possible exception. This is also the chapter narrated by Ann Claybourne, a radical anti-terraformist, who watches the final destruction of a pristine Mars by the forces unleashed by the rebellion. In Ann's case it's not simply a question of whether she'll survive but if there is any compelling reason to survive once her vision of Mars is completely and irrevocably lost. This is an interesting question and I think the resolution of the conflict resonates emotionally. But it happens to soon. Robinson can't resist having his survivors actually reach the Hidden Colony and seeing what has been created. To be me this was redundant and cut across the meaning of the story. The ending could have been simply the inflexible ascetic Claybourne consenting to live for the sake of her husband. That moment contained all of the drama of the novel in a handful of paragraphs.

Anyway, as I said, endings are challenging.