One thing that I certainly appreciated about Red Mars was its principled refusal to over-explain. Enormously complex and esoteric features of terraforming, interplanetary economics and life support were tossed off casually in the novel with nary a word said about them. Two technologies that I found particularly interesting (mostly because I hadn't actually heard of them before) were air miners and moholes. I thought I spend a posting looking at both of them. 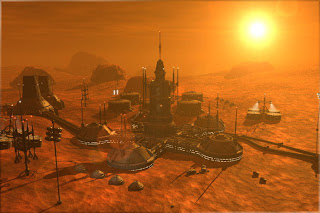 Air mining is very possible and is in fact one of the central things allowing the Mars Direct plan to function. Basically the idea is that a lander on the moon will be able to process the carbon dioxide in the atmosphere to create consumables for a lift-off from the planet. Producing propellants is easy once hydrogen and enough heat have been applied (Sabatier's reaction.) However, in fairness, the air miners described in Red Mars are somewhat more flexible harvesting not just volatiles but also water, argon and magnesium. A quick look at wikipedia's article on the Atmosphere of Mars doesn't mention any magnesium in the air but there's plenty of it in the soil. Guess what gives Mars it's distinctive pink skies? Dust held in suspension by the thin atmosphere of Mars. That dust could presumably be siphoned off by the same air miners producing fuel, water and carbon. 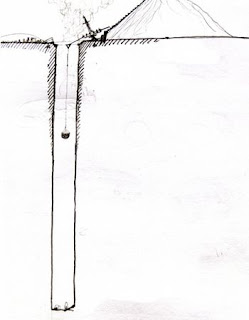 The other technology that impressed me greatly in the story were moholes. Essentially Moholes are enormous pits dug down through the Martian Lithosphere, close to the still relatively active mantle. The temperature at the bottom of a mohole is greater than the frosty surface creating a temperature differential. Robinson describes great cyclones of warm air spinning out from these holes in through ground. So, in the novel at least, moholes,are primarily a way to raise the temperature of Mars, the mining of raw resources is a fringe benefit. The word Moholes began as a portmanteau of the words 'hole,' (obvious enough) and the 'moho' of the Mohorovičić discontinuity. As unbelievable as this sounds, moholes were actually attempted at the bottom of the ocean; the Mohorovicic Discontinuity is a region in the earth crust that lies within striking distance of the Earth's mantle. An experimental hole was dug in the sixties which nearly made into the semi-liquid rock beneath the earth's crust. The idea behind this is to harness the heat of the earth's core for power generation, an idea that crops up in Peter Watts' Rifter series as well. Moholes also make an appearance in the very entertaining Red Faction video games, although they receive even less explanation than they do in Red Mars.

While Red Mars is science fiction and certainly details the exotic technologies required for the habitation of the fourth planet, Robinson doesn't dwell on explanations. He seems much more interested in the intricacies of future philosophies and politics than the technology that makes these things possible. In a novel with a chapter called "Falling into History," that's probably not a bad idea.

Unknown said…
hi!
a friend from kimstanleyrobinson.info just let me know about your post here. Cool one indeed!
I'm the author of the mohole drawing. You can see much more of my Mars artworks on my Da Vinci Mars Design blog : http://davinci-marsdesign.blogspot.fr/
Actually I didn't remember much the air mining, but yes that's a very interesting part of the settlement on Mars.
As you will see on my blog, I have made a lot of images on another impressive tech in the book : the space elevator.
Keep the good work! I really enjoyed that little post on this great book!
February 5, 2013 at 5:20 AM

Morgan Crooks said…
Thank you very much for your kind words and the mohole drawing. You're website is amazing, and I hope you won't mind me sending some additional traffic your way through posts in the future. If the Mars Trilogy television miniseries ever gets off the ground, you have my vote for concept artist.
February 5, 2013 at 1:46 PM