December 26, 2012
When reviewing an adaption it's important to realize something. There is no true Les Miserables. Well possibly the novel, as it sprawls across hundreds of pages, and an equally bulky cast of characters. But that isn't really where "Les Miserables" comes from.

It is after all an adaption of a stage production and a musical. No one night will be exactly the same as the next, even assuming all of the actors are the same. One note might hold for a fraction of a second longer or receive a different emphasis. So when we approach a movie, which will be the same viewing after viewing, it's important to consider just what choices are being made. I've seen two live showings of Les Miz, one which placed a lot more emphasis on the spectacle of the Barricade and revolution. The other, somewhat more subdued, treated the events of the middle third of the story as a tragic backdrop to Jean Val Jean's passion play. The quality of the songs and story of Les Miz isn't in question, what matters are the individual choices of the production.

One strong aspect of the film is that the production does make choices. I think the temptation must have been, find a bunch of talented singers, have them record the soundtrack and then find some unknowns to act on screen. As long as the producers avoided cutting too many important scenes the thing would have made millions and I wouldn't give it the slightest consideration. Instead, as you no doubt know, The director and producer (Tom Hooper and Cameron Mackintosh) decided on a riskier course, not just hiring name actors but insisting they sing in scene, to preserve the integrity of the acting. The pay-off for this gamble is Anne Hathaway's truly devastating take on "I Dreamed a Dream," and the fiery exchanges between Hugh Jackman (Jean Val Jean) and Russell Crowe (Inspector Javert). The singing is rough, raw, and firmly lashed to the cause of telling a story.

The movies is shakier when it comes to the full-cast numbers. In particular, the opening scene of prisoners dragging a man-of-war into dry dock, is powerful visually. Neptune's full wrath is on display, towering waves crashing over shattered ships, and broken men. The dry dock itself, an immense scalloped bathtub, filled with men straining against ropes and weather, is an image the film actually returns to late in the movie. Against the chaos of nature, the film shows the colossal systems of control and oppression man establishes as a bulwarks of order. As pure metaphor, this works. However, this scene is also one of the more stirring full-cast numbers in the musical, "Look Down." In the pulsing roar of the waves, the growled despair of the song just disappears. The impulse to extreme close-ups and solos within chorus arrangement makes its first appearance. I don't think this is indefensible, I just think its very hard to hear the song.

Fortunately such minor missteps are few and far between. This film was made with sincerity and surprising craft. Just as the music of Les Miz reuses and revisits melodies and motifs, the movie keeps returning to certain evocative images: Javert's feet walking the edge of the abyss, elaborate barricades and walls, splashes of blue and red. Coupled with an emphasis on the coincidences of the original story (Cosette and Eponine both living in the same part of the city, the reappearance of Fauchelevent, the intertwining footsteps of Val Jean and Javert's fate), these echoes suggest a larger design at work. But where many versions of the story point to these coincidences as evidence of a divine plan, here they suggest something slightly more secular. When Val Jean dies and goes to his reward, he joins the people of Paris in the throes of a successful revolution, safely behind a barricade manned by the armed elect. This is a curiously militant afterlife: heaven as a people's uprising. 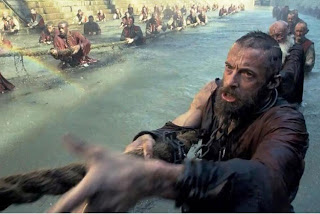 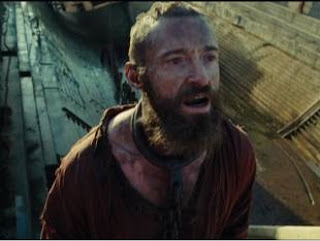