The Influence of the Future

December 01, 2012
Looks like another company is taking a stab at inventing something from the future.

Scanadu's Scout is simple enough and although it doesn't look much like the Tricorder its hyped to be, it seems usefult. Simply hold the device between thumb and forefinger and the sensor takes readings on the owner's pulse rate, temperature, etc. Slick, useable but distinctly not what a Tricorder looks like or functions like.

The Tricorder, depending on whether or not we're talking about the original television series or the various sequels or 2009's re-boot, is a somewhat bulky, handheld sensor package. From a distance, the device takes various readings and provides characters the opportunity to talk about multi-phasic anti-boson fluctuations. 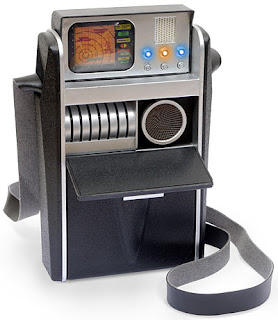 That's not to say that Scanadu is committing fraud in sending out Trek-bait press releases. It's just interesting how a fairly disposable prop in a television series from the sixties has become a kind of touch-stone for marketing. Engadget's article contains an long list of similar articles promoting devices with varying degrees of similarity to the Tricorder, some even look like the satchel-like original.

A tricorder would be useful in the real-world. The point of the device, as far as I understand it, is getting quality information from a distance in the field. Having a tricorder would be another step towards democratizing information and leaving aside how useful such a thing would be to scientists and soldiers and business people, I could imagine the combination of a tricorder with the hyper-aware, constantly uploading digital sphere as being a significant advance. Again this would be somewhat different from the world portrayed by Star Trek. Tricorders are simply a tool used by officers in a heirarchical paramilitary force on missions. What would the future be like if we were all, in a sense, capable of informing ourselves about the condition of the world around us? Would that make us more objective, more biased towards reality or would certain types buy plug-ins that adjusted tricorder readings to fit some prescribed ideological model? I think my question probably contains its own dismal answer.

Star Trek cast a long shadow on the popular imagination of America (probably the world) when it comes to the expectations of what the future looks like. Scanadu's Scout makes me wonder if a TV show can drive technological advancement towards certain ends or if these expectations mean certain types of inventions are always going to be met with a certain degree of interest.